The Great Fox is the Star Fox Team's base of operations as well as a competent battleship. It is capable of holding the team's Arwings, the Landmaster, and the Blue Marine, as well as launching them into apparently any combat situation. Aside from this considerably powerful and versatile arsenal of vehicles, the Great Fox itself carries a twin-linked laser cannon and is supervised by ROB 64, an advanced robot. It is known to be unwieldy, as evidenced by the Ambush of Sector Z in the Lylat Wars.

It was originally built per request by James McCloud who hired Space Dynamics Co. to construct it which he paid for with an 80 year loan. The Star Fox team still use the money they earn from mercenary missions to repay this loan.

The Great Fox was destroyed in Star Fox: Assault, and would be replaced with another ship of the same name in Star Fox Command. 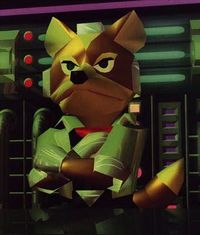 Fox inside the Great Fox.

The Great Fox was still relatively new when James' only son Fox McCloud, having re-formed the Star Fox Team following his father's apparent death, took ownership of the ship. The Great Fox was originally used as a carrier & repair facility for the team's Arwings, Landmaster, and Blue Marine, as well as acting in a logistical capacity by transferring supplies to the combat zone when needed. In terms of combat, the Great Fox used its powerful weapon systems (in the form of 2 powerful laser cannons) to aid the squadron's progression during missions, blowing apart asteroids and causing serious damage to massive battleships (such as the Venomian battleships that guard the Area 6 access corridor to Venom). The ship's own defenses allow it to survive in a variety of environments, allowing it to be able to enter a planetary atmosphere, and land on planet-side spaceports, as well as having a limited aquatic capability (e.g. on Aquas, where it half-submerged itself to deploy the Blue Marines). The ship's major assignment was first breaking the invasion of Corneria by the Venomian Army, and then re-capturing the occupied territories of the Lylat System, and ultimately invading Venom itself, where Andross was defeated by Fox.

Prior to the game's events, the Great Fox has slightly deteriorated as the Star Fox team had a lack of funds to keep it in prime condition.[1] This is shown from the Great Fox's aging outer shell.

With the money received by General Pepper for successfully saving Sauria from destruction and the Lylat system from devastation, the team were able to overhaul the Great Fox. It now appeared as a much sleeker and cleaner looking ship, inside and out, and also added new equipment. This included a long-range transfer system that can send Arwings and Landmasters to a planet's surface when needed, though the team's leader Fox McCloud indicated that it had poor targeting systems.

The ship served the team well, allowing Star Fox to appear where needed throughout Lylat during the Aparoid Invasion. Eventually, the Great Fox led a fleet of Cornerian Defense Force warships to the Aparoid Homeworld, where in the conclusion of the battle, a large swarm of aparoids attacked the Great Fox out in space, while the team was trying to gain access to the planet's core. Its systems compromised and, due to the lack of proper weaponry on exposed areas of the ship's hull, it soon fell prey and was infected by the machine-assimilating aliens. Before it could be compromised, Peppy and ROB, despite knowing it would mean their deaths, heroically sacrificed the ship by deliberately ramming it into the Anti-Laser Shield blocking the main entrance to the core. Peppy and ROB escaped at the last moment, escaping in the ship's bridge, which could also serve in an escape pod function. The pod, rejoining the team following the destruction of the planet, flew back to Corneria. 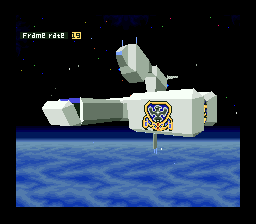 The Mothership in Star Fox 2

A ship called the "Mothership" appears in Star Fox 2. It is considered to be the Great Fox's predecessor. The Mothership was only a carrier-ship without weapon-capacity, so it meant it could only be outside the battle, but could hold and repair up to six fighters.

"Great Fox is the Star Fox Team's mother ship. It is equipped with plasma engines that give it the capability to warp between planets. In addition, the ship is streamlined for atmospheric re-entry, making it capable of landing the Landmaster or Blue-Marine if necessary. Great Fox is stocked with all manner of supplies for the Star Fox Team, including food, clothing and replacement parts. In fact, Great Fox is the mobile home of the Star Fox Team. The late James McCloud contracted Space Dynamics Co., Ltd., to build Great Fox, and took out an 80 year loan to pay for its construction. The Star Fox Team is still using the prize money from their mercenary mission to repay this loan. ROB64, the robotic pilot of Great Fox, is wired directly into the ship's controls. Even though Great Fox rarely participates in the Star Fox Team's missions, it is a very important asset for the team."

"At certain points of each mission, you will receive a transmission from Great Fox. If you acknowledge this transmission (by pressing the Right C Button) ROB64 will send a Supply Container which will contain helpful items like extra Smart Bombs."