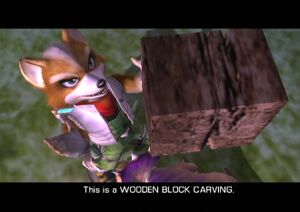 The Wooden Block Carvings are a set of three distinctly-shaped wooden blocks in the shape of a circle, a triangle, and a square respectively. They are featured as items in Star Fox Adventures.

In LightFoot Village, after Fox is freed from the LightFoot Tribe by a CloudRunner, he and Prince Tricky begin to search for a way to reach Chief LightFoot in their search for Krazoa Spirits. In order to reach Chief LightFoot's Hut, Fox must assign the Find Command to Tricky whenever they stumble upon a dirt patch so that Tricky can uncover a Wooden Block Carving. They must then insert the Wooden Block Carvings into their respectively shaped hole in the pedestals around the totem pole. Doing so opens the stepping stones that lead to Chief LightFoot's hut.

It is possible for Fox and Tricky to complete this puzzle before they encounter the LightFoot Tribe, but none of the LightFoots are found in the village at this time.

Later, during the Test of Knowledge, Fox has to insert a Wooden Block Carving in front of the visual representing LightFoot Village.