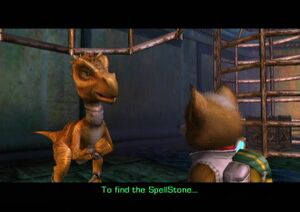 Gradabug is the chief engineer of CloudRunner Fortress in Star Fox Adventures. He is in charge of manning the power generator room. Fox McCloud first meets Gradabug in the dungeon after he is captured and gets the Staff back by using the SharpClaw Disguise. There Gradabug gives Fox the key to the generator room. Gradabug also tells Fox where to find the Queen CloudRunner when General Scales captures her again. He also tells Fox that he must return the SpellStone to the Ocean Force Point Temple.