Star Fox Adventures is a video game released on the Nintendo GameCube in 2002. It is the third game that was released for the Star Fox series. It was developed by Rareware and published by Nintendo. In Japan, a tie-in manga, Star Fox: Farewell, Beloved Falco, was published on the official Japanese website, and it details the events of Falco leaving the Star Fox team.

The game is notable for being the first Star Fox game to feature on-foot missions, save for the secret on-foot multiplayer mode in Star Fox 64. The core gameplay is oriented in a way that the Arwing missions are reduced have arcade-based gameplay. Star Fox Adventures is considered the black sheep of the series, and was reworked from a canceled Nintendo 64 title, Dinosaur Planet. Star Fox Adventures is the last game that Rareware developed for a Nintendo home console, before the resulting Microsoft acquisition.

Few characters and elements from Star Fox Adventures would reappear in subsequent Star Fox titles. The game marks the first appearance of Krystal, who subsequently became a brief member of the Star Fox team, and Prince Tricky, who is the sidekick of Fox in parts of his adventure.

Star Fox Adventures is notable for being the first game to carry the Star Fox title in PAL regions (Europe and Australia). Subsequent titles would also follow through with this trend. The two previous titles, Star Fox and Star Fox 64, were respectively titled Starwing and Lylat Wars because of trademark issues. 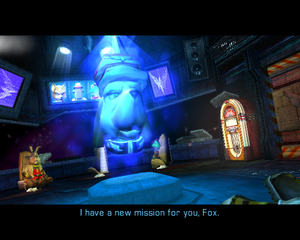 Eight years after Andross's first defeat, Krystal investigates the destruction of her home planet, Cerinia, and the death of her parents. Krystal hears a distress call from Krazoa Palace and decides to respond to it. While traveling on a CloudRunner, a fireball blasts her staff out of her hand from a galleon ship. On board, Krystal discovers that her home planet was attacked by General Scales. She loses her Krystal is persuaded by a wounded EarthWalker to obtain the Krazoa Spirits and return them to the palace. After acquiring and releasing the first Krazoa Spirit, however, a mysterious being sends Krystal into the spirit's path, trapping her in a floating crystal atop the palace.

Meanwhile, on the edge of the Lylat System, General Pepper contacts the Star Fox team, asking Fox to investigate Dinosaur Planet. Since the team are desperate for money and maintenance, Fox agrees to have a look. He goes unarmed at the request of General Pepper, as his mission is "about saving the planet, not blowing it up".

At ThornTail Hollow, Fox finds Krystal's Staff in the ground and wields it. Shortly after, he meets the Queen EarthWalker, who tells him that Scales stole four SpellStones two of the Force Point Temples, which caused the planet to tear apart. She tell Fox to meet the WarpStone and rescue her son, Prince Tricky, at Ice Mountain. After Fox rescues Tricky, he becomes Fox's sidekick for a remainder of his adventure.

As Fox retrieves the SpellStones, he realizes that the planet can only truly reunite itself if he retrieves the other five Krazoa Spirits. The final Krazoa Spirit is guarded by General Scales himself. Just before Fox and Scales engage in combat, a mysterious voice orders Scales to surrender the spirit, to which he reluctantly agrees. Fox takes the spirit to the Krazoa Shrine and the six Krazoa Spirits free Krystal from her prison.

The Krazoa Spirits are forced into the head of a massive Krazoa statue, who comes to life and reveals itself to be the revived Andross, the mastermind behind the spirit scheme. He flies off into space to resume his conquest of the Lylat System. During the final fight, Falco appears out of nowhere and assists Fox in fighting Andross. After Andross's defeat, the Krazoa Spirits return to a restored and renewed Dinosaur Planet. Falco decides to rejoin the Star Fox team, and Krystal becomes a newly-recruited member. 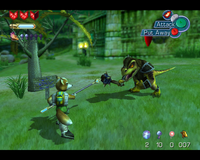 Star Fox Adventures is notable for being a departure from the rail-shooter genre that the series had been established upon. Fox moves around Dinosaur Planet and the four SpellStone areas on foot, and the locations are set in three-dimensional environments, where Fox must collect items and solve puzzles as he goes along. There are a few instances where Fox does pilot his Arwing, but only for traveling between the different areas of the planet.

The gameplay is heavily based on The Legend of Zelda: Ocarina of Time. Fox is unable to jump unless he runs off the edge of an object or a cliff, and can roll after landing on the ground, in the same fashion that Link jumps off edges. Star Fox Adventures also has a day-and-night phase, but a more accurate and gradual one. A key difference with Star Fox Adventures is that Fox automatically acquires his targets by approaching them, unlike The Legend of Zelda: Ocarina of Time, which requires manual targeting.

In ThornTail Hollow, the hub location on Dinosaur Planet itself, Fox finds Krystal's Staff sticking out of the ground. After pulling it out, Fox uses staff for his main weapon during the rest of his adventure (as General Pepper prohibited him from using his Blaster). The staff itself is mostly used in combat, but with Staff Upgrades, Fox can use the Staff to perform additional tasks, including firing projectiles, freezing enemies, or boosting up to higher areas.

Every level (not including the main world, Dinosaur Planet) have a SpellStone that Fox must recover.

Star Fox Adventures was originally developed on the Nintendo 64 by Rareware with the title, Dinosaur Planet, and was not intended to be a Star Fox title. Krystal would have originally been the protagonist and the adopted child of a wizard-like character named Randorn, alongside another character named Sabre (who later became Fox). Sabre befriends a young triceratops named Tricky (who was originally the same one from Diddy Kong Racing).

One day, Shigeru Miyamoto noted the similarities between Sabre and Fox and proposed them to change it to a Star Fox title. Star Fox Adventures is the only game Rare released on the Nintendo GameCube, and is their last game released on a Nintendo home console.

Star Fox Adventures received mixed reviews, but it was generally positive as it received an average score of 81 on Metacritic. The game was universally praised for its graphics and longevity. The criticism was mostly focused toward the lack of Arwing piloting, a key gameplay feature of the Star Fox franchise. Another problem that was addressed is the somewhat repetitive scavenger missions that Rareware was already notorious for in some of their previous releases.

Star Fox Adventures managed to receive a Nintendo's Player's Choice award for the amount of copies it sold.