General Pepper is a general in the Cornerian Defense Force and the employer of Star Fox in many of the games. He was a good friend of James McCloud and Peppy Hare when they were part of the Cornerian Army. He later chose Peppy as his successor some time before Star Fox Command. He was voiced by David White in Star Fox 64, John Silke in Star Fox Adventures and Gray Eubank in Star Fox: Assault.

General Pepper's appearance is based on that of a bloodhound. In all of his appearances, he wears the same army uniform that is befitted the general of the Cornerian Army. A similar uniform was later passed on to Peppy at his promotion.

"Commander of the Corneria Defense Force. He was the commanding officer of Peppy and Fox's father when they were in the service. His leadership abilities and trustworthiness have made him a popular figure."
— Star Fox: Assault instruction booklet, page 38

General Pepper was promoted to General of the Cornerian Army many years before the Lylat Wars. He was a close colleague to Dr. Andross, but showed a great animosity towards him.[1] When Andross's experiments got out of hand and killed many lives, Pepper had him exiled to the quarantine planet, Venom. Years later, when Andross began his climb to power, Pepper hired his old friend James and his team to check on Andross. The team was betrayed by member Pigma Dengar, James was killed and Peppy barely escaped to tell the tale. Pepper always felt responsible for the event and began to take on a role in the life of James's son, Fox McCloud.

When the Lylat War broke out, Pepper hired the new Star Fox team, now led by Fox. While the Star Fox team made their way to Venom, Pepper gave them advice on the areas that they visited. After the fall of Andross, Pepper asked Fox if he would join the Cornerian Army, but Fox cut him off and said no.

At the end of the game, General Pepper contacted the team and forwarded them a payment for saving the planet. He was surprised that Andross was still alive and told Fox about the King and Queen EarthWalker's thanks. 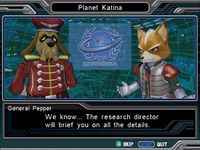 Pepper telling Fox about the Aparoids in Star Fox: Assault.

Pepper once again contacted the Star Fox team about an attack on Fortuna by Oikonny. After Fox defeated Oikonny and an Aparoid, Pepper told Fox that there was a distress signal coming from Katina and asked him to check it out. Later, after Fox had sent the Core Memory of an Aparoid to Pepper, he responded saying that they had located the Aparoid Homeworld with the information obtained. To Pepper's dismay, Star Fox member Krystal recieved a message from Sauria asking for help, and they were went there instead. During this time, Pepper's forces were overrun by Aparoids invading Corneria and Pepper sent a transmission to Star Fox, but was interrupted. When Star Fox next saw him, he had been infected by the Aparoids and fused to his flagship. Unlike Pigma, an earlier victim to the Aparoids, Pepper was able to fight back against the infection and, though his body was no longer under his control, he still controlled his mind and told Fox to shoot him down.[2] General Pepper was defeated by Fox, but was saved, against his wishes, by Peppy. After the defeat of the Aparoid Queen, it was revealed by Fox that Pepper might be okay due to the destruction of all Aparoid cells.

About a year after his infection, Pepper became grievously ill and was confined to his sickbed. Pepper suggested his old friend Peppy Hare as his successor. It was during the Anglar invasion that Krystal learned and told the Star Fox team that Pepper and Andross were close colleagues before Andross's corruption.

General Pepper has only appeared as a trophy in both Super Smash Bros. Brawl and Super Smash Bros. for Nintendo 3DS. The trophies are respectively based on his artwork from Star Fox: Assault and Star Fox 64 3D each.