Titania (Japanese: タイタニア Titania), spelled Taitania in Star Fox 2, is a vast, barren desert world located in the Lylat System. The planet's atmosphere is composed of black clouds and red dust blown by ion storms that buffet its surface.

Titania is known as the "Red Planet" due to massive ion storms that stir up red dust from the planet's surface and deposit it into the stratosphere. Archaeologists have discovered a large number of ancient ruins on Titania, pointing to an ancient civilization that once inhabited the planet. The only survivor of this lost civilization is a creature code-named Goras, believed to be an advanced planetary defense system. Due to Titania's hostile nature, travel to the planet is usually restricted to researchers alone.

In Star Fox and the Nintendo Power comic, Titania is a frozen planet, much like Fichina in the Star Fox 64 reboot. In the game, the planet's frozen climate can be changed instantly to a warmer climate by destroying a planetary weather device.

In Star Fox 2, Titania served as one of Andross' many bases. Note that in this game, Titania has a moon.

During the Lylat Wars of Star Fox 64, scout forces sent by Andross investigated the planet and discovered the Goras. Through bio-mechanical experimentation, Andross altered the creature's DNA and turned it into a fearsome warrior. The Star Fox team battled through Venomian forces in search of Slippy Toad, who had crash-landed on Titania and was captured by the Goras. Ultimately, Fox McCloud rescued Slippy, destroying the Goras in the process.

Due to its barren nature, Titania was not targeted during the Aparoid invasion. Though, a desert on Titania is the setting of one of Star Fox: Assault multiplayer battlefields. 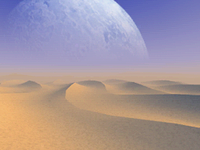 In all of its appearances in the Star Fox Command storylines, Titania plays the same role. Fox was told by either, Peppy Hare or Krystal that Andross had worked on a terraforming project for Venom before his death. A device meant to neutralize the Venom Sea was hidden here by Andross and was protected by a bioweapon. Depending on the storyline, the team that goes to find this device was either the Star Fox team from Star Fox and Star Fox 64, the Star Fox team from Star Fox: Assault, or Fox and Falco Lombardi teaming up with either Wolf O'Donnell or Dash Bowman. After this, the team flew to Venom and used it to neutralize the acidity of the Venom Sea. In one storyline, though, Wolf betrayed Fox and Falco and took the device so that his team could be the heroes.

In the Star Fox comic, which takes place about four years after the Lylat Wars, research bases were established on Titania, including one commanded by Captain Shears. Katt Monroe, as well as the other members of the Hot Rodders gang, battled against another Goras that was secretly sent by Captain Shears himself. Shears and his subordinates were later revealed to be remnants of Andross' army, and they had experimented with various regeneration technologies in hopes of reviving Andross. The regeneration process finished prematurely, and the result was a mindless clone of Andross which was promptly defeated by Fox McCloud.