Dr. Andross (Japanese: アンドルフ Andorf) is the main villain of the Star Fox series and sworn enemy of the Lylat System. He has a grandson, Dash Bowman, implying he had a child, and a nephew, Andrew Oikonny, implying a sibling.

Andross' appearance has remained superficially constant throughout the games he has appeared in. There are, however, marked differences in how his appearance has changed from game to game. In Star Fox, he looked like a vague approximation of a disembodied human head, whose features were very simple. This incarnation of Andross reappears in Super Smash Bros. Brawl. His greatest addition as of yet was in Star Fox 64, where he benefited from being given proper textures, a range of facial expressions, and similarly disembodied, gloved hands. This version is also a trophy in Super Smash Bros. Melee

As consoles became more powerful and capable of rendering a higher number of polygons and highly detailed textures, Andross was given a makeover in Star Fox Adventures. Here, his dramatic return at the end of the game came as a figurative and literal twist as he had, for the majority of the game, hidden behind a statue of a Krazoan head. When, at the very end of the game, this head swiveled to reveal Andross' face on the other side, it became apparent that the designers took care in giving the character unsettling, almost demonic features, as well as a more advanced palette of facial expressions, and a small selection of lip-synced dialogue.

Andross started his career as the lead scientist of the Cornerian Defense Force. He was the partner of General Pepper, but they were intense rivals which foreshadowed complications between the two. Andross's research focused on weapons of war, but Corneria's time of peace left him unable to truly test his experiments. One experiment got out of hand and destroyed an entire city on Corneria. General Pepper had him banished to the distant planet Venom. Five years later, when Pepper had sent the original Star Fox team, Andross hired one of their number to betray the other two. Pigma Dengar, the team member he hired, did just that and this led to the apparent death of James McCloud.

In Star Fox and Star Fox 64, Andross began his invasion of the Lylat System. He was challenged by the new Star Fox team, led by the son of James McCloud, Fox. Andross had been experimenting with many things including an array of bioweapons for the war. He had also created several robotic defense weapons and hired the Star Wolf team to hold off Star Fox. All failed and Fox McCloud himself alone invaded Andross's lair to battle him. When Fox finally encountered Andross, he found that the experiments Andross had conducted had transformed him into a giant, floating head and pair of hands. Fox destroyed this form and Andross was revealed to only be a giant brain and set of eyes. Fox defeated this form of Andross as well, setting off a massive explosion that took out his entire lair. If Star Fox had gotten to Venom from Bolse Defense Satellite, Fox would have encountered a false, cybernetic Andross and Andross's face would appear after Star Fox collected their reward from Pepper, signifying his survival.

Andross apparently survived his destruction at the end of the Lylat Wars and spent his final days on Venom. Andross knew that his fight with Fox had shortened his remaining days and gave up his hopes for ruling Lylat in the hope that he could leave something behind that was beneficial for Venom. He built a machine that would neutralize the acidity of the Venom Sea in hopes to begin a terraforming project for Venom, but some event prevented him from initiating his plans and the device was hidden on Titania. 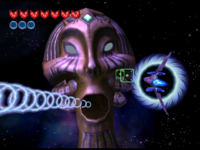 Fox fighting the Krazoa head side of Andross.

In Star Fox Adventures, Andross's spirit somehow survived after his body's death. He took refuge in Dinosaur Planet where he discovered the Krazoa Spirits. Andross gave power to the tyrant General Scales, who was unaware of such gift. Unknowingly, he began the first steps of Andross's plan by releasing the Krazoa Spirits. When a vixen named Krystal returned the first Krazoa Spirit, Andross looked at her (suggested from his perspective, which shows a blurry, saturated view). Krystal shouts to him, "It's you!" (suggesting that she knew him beforehand), and Andross charges at her, somehow causing her to rise to the top of Krazoa Palace and be imprisoned within a crystal. Andross tries in combination with the Krazoa to create a new body. Andross later watched Fox as he participated in the Test of Fear.

By returning the final Krazoa Spirit, the head from a large Krazoa statue floats off. The head talks loudly and calls itself the "Krazoa God". It claims to have been reborn and demands that both Fox and Krystal bow before him. Krystal refuses and tries attacking the Krazoa God by using the Fire Blaster from her staff. This attack is ineffective, and the Krazoa God hovers upward into space.

Fox jumps into his Arwing and blasts off into space where he finds the Krazoa God. The Krazoa God turns around, revealing himself to be Andross. Andross exclaims that he is going to destroy the Lylat System. Andross turns around again and hides behind the Krazoa Statue head, and the battle starts.

The Krazoa Statue tries attacking Fox by spitting out large, circular waves at him. Fox must avoid being damaged by the waves, and he must fire at each of the Krazoa Statue's vulnerable spots a few times, including its two eyes and the jewel on its head. After this, Andross turns around, revealing himself again. 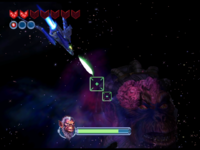 Fox firing at Andross to attack him while he is transparent

The second portion of the fight is very similar to Star Fox 64, both Andross's attacks and his weak spots. Andross tries to attack Fox by swiping his hands at him. Just like their previous fight, Fox can attack Andross by shooting at both of his hands. Andross also tries clapping his hands onto Fox. Andross also uses a new attack where he spits meteorites at Fox, and he also spits out two Silver Rings. Fox can rapidly shoot at the meteorites to avoid them, or [[barrel roll] into them. After this, Andross then attempts to inhale Fox (along with some meteorites), who can avoid Andross by attempting to fly away and barrel rolling repeatedly. If Fox is inhaled by Andross, he chews Fox, and spits him back out of the Krazoa head's mouth. This repeats the first part of the battle.

When Fox destroys both of Andross's hands, he turns back around, revealing the Krazoa head again. The battle mostly repeats itself, as Fox must attack the Krazoa Head again, and then Andross's hands after he turns back around. There are a few differences, including Andross occasionally sending out spacecraft enemies to attack Fox, and also using his hands to emit large, circular waves. 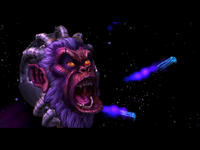 When Fox destroys both of Andross's hands again, Andross tries inhaling Fox another time. Fox is nearly inhaled but is suddenly saved by Falco, who shoots at Andross. After this, Andross tries attacking Fox again by spitting more meteorites out at him, then sending out multiple spacecraft, which Fox can destroy by shooting at them. He then attempts to spit meteorites back out at Fox. For each time Andross spits out meteors, Falco flies by and leaves behind a Supply Container with a Smart Bomb.

As Andross tries to inhale Fox again, he must fire his acquired Smart Bomb into Andross's mouth. This causes Andross's body to become transparent for a brief moment, except his brain which becomes visible and open for Fox to shoot at. A health meter is also displayed, showing how much damage that Andross has taken. While Andross is transparent, he moves around faster and tries ramming into Fox, who must still avoid being hit by him. After a while, Andross's head returns to a normal state. Fox must continue the pattern of firing a Smart Bomb into Andross's mouth, then shooting at his brain, until Andross's health meter runs out.

After running out of health, Andross shouts in defeat, and the Krazoa Spirits leave his body. Andross then explodes into a massive blast of energy. Fox and Falco quickly maneuver their Arwings away from the explosion and retreat back into the Great Fox, where they are congratulated by the rest of the Star Fox team.

Andross remains dead during the events of Star Fox: Assault, but his legacy continues. His nephew, Andrew Oikonny, leads the remnants of Andross' army on Fortuna and remains true to Andross' strange penchant for appearing as a massive floating head by building an airborne vehicle which mimicked Andrew's head and hands. This ship appeared as the first level's false boss in the game. Fox quickly dispatched the reproduction. The badly damaged craft, presumably piloted by Andrew himself, attempted to escape but was utterly obliterated by an Aparoid while Andrew delivered a megalomaniac monologue.

In Star Fox Command, Andross was one of, if not the only, character to have the same role during the invasion of the Anglar regardless of the story. When Fox and whatever teammates he had at the time went to Titania, they encountered an entity that claimed to be the ghost of Andross. This was probably a hologram Andross left with his bioweapons to guard his acid neutralization device based on Andross's dialogue sprite. Unable to do anything when Fox and his allies defeated the bioweapon, Andross allowed him to take the device.