Super Smash Bros. Brawl is the third game in the Super Smash Bros. series. It features three playable characters from the Star Fox series, those being Fox, Falco, and Wolf. The former two also have a role in the Subspace Emissary, which serves as the game's story mode, where they are both paired with Diddy Kong.

The game's Star Fox characters have a good variety of special moves; two recoveries, a projectile and a shield: 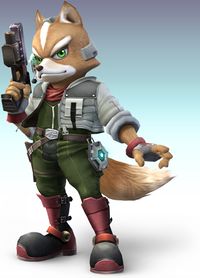 Fox is easily the fastest of the three, but is also the lightest. His falling speed is also one of the game's fastest. He is a starting character, so he doesn't need to be unlocked. He is considered a solid character with both good capabilities of racking up damage and KOing opponents.

Blaster
Fox's neutral B move is the Blaster. It's a projectile weapon, which fires extremely fast but does not make foes flinch. It is also the weakest of the Star Fox characters' Blasters, one shot doing 3% damage. Can be used to steal KOs.
Fox Illusion
Fox's side B is the Fox Illusion. This move sends him dashing horizontally at extreme speed, dealing just 4% damage to any foes it comes in contact with. This is mostly used as a horizontal recovery, and like with most recovery moves, Fox goes into helpless mode if he ends up in mid-air after using the move. This means he cannot attack or jump until he comes in contact with the stage or is hit.
Fire Fox
Fox's up B, the Fire Fox, is his primary recovery move, but is mostly used for vertical recovery. He first bursts in flames for a second and then darts in the direction of the control stick. Although its range is not all that good, it's the best among the Star Fox fighters. It is actually Fox's slowest move, and because of the huge start-up lag the move is easy to dodge. On the bright side, it can deal some good damage; if the foe is hit by both the start up and the actual move, it can deal up to 28% damage, although it can also deal as little as 7% damage.
Reflector
Fox's down B move is the Reflector. When using this move, Fox protects himself with a cyan hexagonal shield, which is mainly used to send back your opponent's projectiles. The reflected projectiles get a multiplier of 1.5 to their power and knockback. The Reflector also deals direct damage, though only little. On the ground the damage is 5%, and in the air it's 4%. Using the Reflector repeatedly also causes Fox to fall a lot slower. This can be used to make it harder for opponents to predict your recovery.
Final Smash
Like all three of the Star Fox characters', Fox uses the Landmaster as his Final Smash. Fox's variation of the move is the most balanced of the three. It is slightly hard to control, and has average strength and speed. Pressing the A button fires the cannon, each blast dealing 17% damage. Pressing down causes the tank to do a barrel roll, dealing 11% damage to all opponents on the tank and in the near vicinity. The Landmaster can float high enough to send opponents on top to a Star KO, although it should be noted that Fox's Landmaster has the lowest air speed of the three. It is also possible to commit suicide by flying too high. Performing a spin by pushing the control stick to opposite direction will cause 17% damage to opponents. Ramming to opponents also causes damage, and depending on the tank's speed, it does around 15% damage. The Landmaster lasts 18 seconds, making it possible to score multiple kills on one opponent. 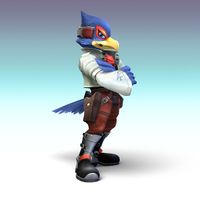 Falco is one of the two unlockable Star Fox characters. Falco is less damaging than both other characters. His moves are quite similar to those of Fox's. He also has a nice balance of moves and is very in the tier list.

Blaster
Falco's neutral B is a projectile and is considered one of the best in the game. It fires a lot slower than Fox's but the shots travel further and is also capable of flinching opponents. It deals 3% damage.
Falco Phantasm
Falco's side B move has the longest range of the other 3 characters. It also does an average amount of damage. This move will inflict 2-9 points of damage. Over 5 damage is exceedingly rare. As with Fox's Fox Illusion, Falco cannot move or attack after using it.
Reflector
Falco's down B move has a unique aspect: it is also a projectile. After initiating the move, Falco will kick it in front of him, inflicting minimal damage. This does around 4-8 percent. As always, it will still deflect other projectiles.
Fire Bird
Falco's up B is his recovery and it has the longest range of the three. It also has a higher chance of hitting opponents, doing about 7-18 damage. Other than the fact of the better range, Fire Bird is a regular recovery.
Final Smash
Falco's Landmaster looks extremely similar to Fox's. This version does less damage, but moves faster and is easier to control. One of its blasts inflict 18-27 damge. It also has a longer flying distance. This Final Smash also has a limited time. 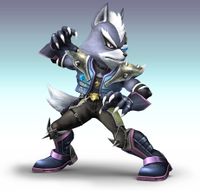 Wolf is the second of the 2 unlockable characters, his moves are mostly the same, with a few differences. When selected, he will speak out of the remote, saying "Playtimes over.'

Blaster
Wolf fires a blaster shaped like a sword, doing 5 damage per shot, but if you are hit with the blade while shooting, it is another 4 damage.
Reflector
Wolf's Down-B move is also the reflector, which, while reflecting, will electrocute any players standing directly next to him.
Fire Wolf
Wolf's Up-B causes him to to a kick into the sky, doing around 15% damage.
Wolf Flash
Unlike the other Phantasms, Wolfs Phantasm will go diagonally 100% of the time, doing a very small 3% damage.
Final Smash
Wolf's Final Smash, while the strongest of the three, is also very short lasting, lasting less than 25 seconds,

Brawl's adventure mode, the Subspace Emissary, has a arc involving two of the Star Fox combatants, Fox and Falco. Wolf is not in the storyline of the Subspace Emissary, but can be unlocked after this mode is completed. It begins when an Arwing is seen engaging in combat with the Halberd, and while the pilot is skilled at missing most of them, is soon shot out of the sky by the Halberd's cannons. Later, the pilot is revealed to be none other than Fox McCloud himself, and after disturbing the Pokémon Rayquaza with his Arwing, he, with the help of Diddy Kong, both defeat Rayquaza and go traversing together. After a while, they go up against a clone of Bowser, who, after his demise, the real Bowser tries to stop them with the Dark Cannon, but both Fox and Diddy Kong escape in time.

After trekking east in the jungle, they finally reach the end of it, and while all seems good, the real Bowser comes up from behind and fires the Dark Cannon at Diddy Kong in the back, and is turned into a trophy. Shadow bugs, a type of bug that manifests the characters and creates clones of them, take control of the now trophy Diddy Kong. While all hope is lost for Fox, Falco Lombardi flies in with his Arwing and destroys Bowser's Dark Cannon, which upsets Bowser and he departs in his Koopa Clown Car. While Fox revives Diddy, the clone of Diddy Kong is created and is 3x the height of the original Diddy. They team up to defeat it, and after the fight, they still continue to find the trophy of the original Donkey Kong, which is why Diddy Kong had kept going. With the Great Fox with them, they all board it to go and save Donkey Kong, and, like many of the other fighters, they are resorted to minor characters.

There are a total of 23 trophies from the Star Fox series that can be obtained: