Welcome to the one and only Lylat Wiki! We're a comprehensive Star Fox wiki that aims to cover the entire Star Fox series. Interested in helping out? Create an account and start editing! We have 459 articles of 4,281 pages and 1,516 files.
You are currently viewing the Slippy theme.

These are tasks we need help with. On the left are continuous tasks that will always need work, while on the right are current tasks. They are the article(s), template(s), file(s), image(s) category(ies) or discussion(s) currently going on and we recommend you check them out. 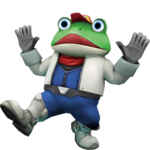 What's happening in the world of Star Fox?

A Featured System is yet to come, stick around until it does!

These websites are affiliated with Lylat Wiki. We recommend you check out these websites!

Sites that are part of our community
Community Outposts

Pages that are run by members of the community, but are part of a larger site that is not.

Affiliates and other fansites

These are links to standalone, Star Fox forums.

NIWA is a network of independent wikis focusing on various Nintendo franchises.