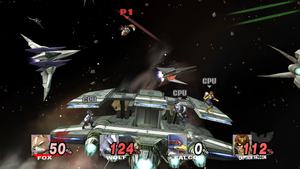 Lylat Cruise is unique in that it does not take place on the Great Fox, but on a Pleiades Class Cruiser (a vehicle that does not appear in any traditional Star Fox title). The Pleiades warps throughout the Lylat System visiting the planet of Corneria, the Meteo Asteroid Belt, a interplanetary skirmish, a dogfight between Star Fox and Star Wolf, and a calm section of space. Many of these events are based on Star Fox: Assault.

Like Corneria and Venom from Super Smash Bros. Melee, a Star Fox character, either Fox McCloud, Falco Lombardi, and Wolf O'Donnell, can perform unique smash taunts on this stage. This allows the character to contact the Star Fox and Star Wolf teams via communicator. This ensues a conversation, which differs based on the Pleiades' location and which Star Fox character initiated the taunt.

In Lylat Cruise, Barrels and Crates take on a futuristic appearance. This stage is the setting for fights against the Star Fox characters in both Classic and All-Star Modes and the fight to unlock Wolf. A secret door in The Ruins stage of The Subspace Emissary after its completion leads to this stage where Wolf can be fought. Lylat Cruise is the only Star Fox stage out of the entire Super Smash Bros. series that without any stage hazards, more specifically, Arwings and Wolfens shooting lasers at fighters.

My Music Songs in Lylat Cruise

In Super Smash Bros. for Wii U