From Lylat Wiki, your source on Star Fox information. By Fans, for Fans.
(Redirected from Ancient Well)
Jump to navigationJump to search

ThornTail Hollow is the first area explored on Dinosaur Planet in Star Fox Adventures. It is the home of the ThornTail Tribe and the WarpStone. It is the area that Fox most often visits during the game, and it acts somewhat like a hub location.

ThornTail Hollow is a thriving, peaceful area filled with plants and has a water stream flowing through. It is also the natural habitat of the large Dumbledang Trees, which sprout Dumbledang Pods. Other plants include the Bomb Spore Plant and some Magic Plants. About four or five ThornTails appear around the location, and can be interacted with. They sometimes even provide advice to Fox. The WarpStone is located at the top-left region where he is surrounded by a circle of water.

A few areas are located from within ThornTail Hollow: the ThornTail Store, which is run by the ShopKeeper, a Staff Cavern with the Fire Blaster upgrade, and the Ancient Well.

The main enemies of ThornTail Hollow are Bloops and MushGuses. In parts of Fox's adventure, Snipluks and yellow SharpClaws are also featured. 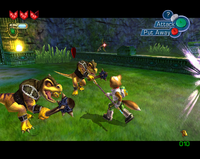 Fox fights some SharpClaws with his newly-acquired Staff.

ThornTail Hollow is one of the most frequently visited locations during Fox's adventure, and is somewhat of a hub world. The first thing that Fox must do is obtain his main weapon, Krystal's Staff, which is located in between a circle of flowers, north of the Arwing's landing spot. Fox must head just outside a stone structure, where he is confronted by four yellow SharpClaws. He must battle them with his newly-obtained Staff.

After Fox defeats the SharpClaws, a stone wheel moves aside and reveals a small rock, which leads down into a Staff Cavern. This is where Fox obtains the Fire Blaster upgrade. After exiting the cave, he must head back to the stone building and shoot a large Fire Panel.

After doing this, Fox meets the Queen EarthWalker, who tries telling him to head to Ice Mountain. Because Fox cannot understand her language, Slippy Toad helps translate her speech to Fox. After some discussion, the Queen EarthWalker lets out a call, and a ThornTail blocking the wall to the WarpStone moves out of the way. To blast open the wall, Fox must grow a Bomb Spore Plant and explode it.

Fox must then meet the WarpStone, who complains he is not provided gifts anymore. If Fox has ten Scarabs, he can purchase Rock Candy from the ThornTail Store and feed it to the WarpStone. After some discussion, the WarpStone allows Fox to warp to Ice Mountain, where Fox must rescue Tricky.

After completing Ice Mountain, Fox and Tricky must head back to ThornTail Hollow and meet with the Queen EarthWalker. She is feeling sick and must be fed six White GrubTub Fungi to feel better. By using the "Find Secret" Sidekick Command, Fox tells Tricky to dig through a wall to the Ancient Well, where these fungi are located at. 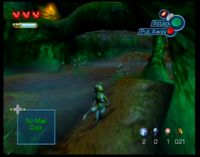 Fox on the upper floor of the Ancient Well.

The Ancient Well is a dark pit located in ThornTail Hollow. It is inhabited by a lone ThornTail (otherwise known as "Crazy ThornTail"). He claims to have lived in the Well for 50 years. Fox must have a FireFly Lantern for the Crazy ThornTail to allow him in the deepest parts, where he can find the White GrubTub Fungi.

A Staff Cavern is located on the upper floor of the well, and is where Fox can obtain the Rocket Boost Staff Upgrade.