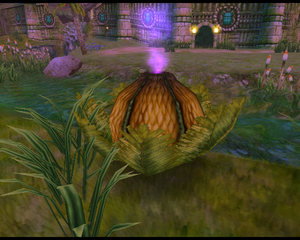 Bomb Spore Plants are explosive plants found on the planet Sauria in Star Fox Adventures. They are large, dark brown, pulsating buds, with a couple of green leaves coming out of the base. The bud constantly expels some sort of gas, and this gas is probably what causes the plant to explode.