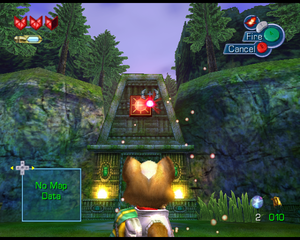 The Fire Blaster is the first Staff Upgrade that Fox obtains in Star Fox Adventures. It allows him to shoot fireballs from the tip of Krystal's Staff at distant objects, including enemies and their associated switches. Fox obtains the Fire Blaster upgrade from a Staff Cavern in ThornTail Hollow, shortly after obtaining the Staff itself.

Other essential uses of the Fire Blaster include: detonating Bomb Spore Plants and lighting torches. Some enemies, such as Peepers, can only be defeated from the Fire Blaster. It also plays an essential role during the boss fights against Galdon and Drakor.

Near the end of the game, after Fox freed Krystal and Andross was resurrected, Krystal retrieved her Staff and tried using Fire Blaster on Andross, to no effect.