WarpStone is a massive humanoid torso made of stone, who resides in a circular, isolated island of ThornTail Hollow in Star Fox Adventures.

The WarpStone has a Scottish accent, and his voice actor is John Silke. 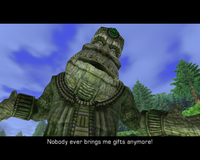 The WarpStone complaining that he is never brought with any gifts. 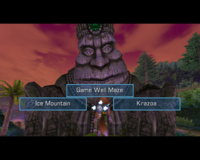 The locations that the WarpStone allows Fox to access

In Star Fox Adventures, Fox can meet the WarpStone after talking to the Queen EarthWalker, who tells him that the WarpStone can send him to Ice Mountain. She then lets out a cry and a ThornTail moves out of the way from the path to the WarpStone. The path is blocked off by a fragile wall, which Fox can break by planting a Bomb Spore then detonating the resulting Bomb Spore Plant. The WarpStone is located in the center of the island, on a platform engulfed by a small pond. Fox can swim around the pond and talk to the WarpStone from the other side, by standing on a levitating patch of grass.

By talking to the WarpStone, he complains that nobody gives him gifts anymore. Fox can only receive the WarpStone's attention after feeding him a Rock Candy. The WarpStone loudly asks who disturbed him from a thousand-year slumber, while raising Fox's platform upward. Fox asks for the WarpStone, to which the WarpStone at first laughs at loudly and refuses. He then agrees to help Fox after being reminded of his purpose of being a WarpStone. He gives two locations for Fox to warp to, each represented by one his right or left hand respectively, Ice Mountain or Krazoa Palace. Because of the camera's position, the player can push Left to warp from his right hand and vice versa. He also gives Fox a third option of going below him into the Game Well Maze, if the player pushes Up on the Control Stick. The player can press B to cancel selecting an option.

If Fox selects Game Well Maze, the WarpStone slightly lifts himself up, revealing the entrance for Fox. He also does this when Fox exits the location. He does not allow Fox to warp to Krazoa Palace unless he has at least one Krazoa Spirit.

The WarpStone telling Fox that he and Tricky must go to Dragon Rock.

After obtaining the first Krazoa Spirit, Fox can revisit the WarpStone, who gives him a Medium Scarab Bag, allowing him to pay 100 Scarabs for entering Cape Claw. By warping Fox to Krazoa Palace, he says that Prince Tricky cannot warp with him, as he cannot incapable warp dinosaurs as well. 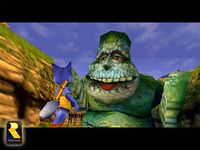 Krystal talking to a SwapStone in Dinosaur Planet

There were originally two WarpStones in Dinosaur Planet known as the SwapStones (also known as the SwapStone Twins or SwapStone Brothers). Their names were Rocky and Rubble, and each had a distinct personality but otherwise had the same main purpose: allowing the player to change between Krystal and Sabre. Rocky and Rubble are said to enjoy 'rock music', and their favorite food is pebbles and gravel that fizzle on the tongue. Their dislikes include moss and beetles trapped up their nose.

Rocky and Rubble are millions of years in age. Their history goes all the way back to the time period of the ancient Krazoa. They were formed from magical rocks mined from inside Warlock Mountain. Rocky and Rubble formerly roamed the land and even constructed the Shrines and Force Point Temples. Ever since the Krazoa extinction, Rocky and Rubble rested for millions of years. Only their top half is shown, as their bottom half was covered from the changing ground.

Rubble is described as laid back and sleepy, and he has the ability to sleep for a few millennia. Rocky, on the other hand, is loud and awake: he only sleeps for a few weeks at his favorite Granite quarry, and laughs as he assists Krystal.

Both SwapStones are willing to help Sabre and Krystal on their journey in exchange for magic energy. Each SwapStone is located in an area with their name, Swapstone Circle and Swapstone Hollow. Aside from swapping between characters, Rocky and Rubble also provide level hints and a recap of Sabre and Krystal's adventure. They also have another essential role: warping either character to Warlock Mountain.[1]