Prince Tricky, or simply known as Tricky, is an EarthWalker and the son of the King and Queen EarthWalker. His first and main appearance is in Star Fox Adventures. His original voice actor is Kevin Bayliss but was later replaced with Chet Morgan.

Ever since Fox rescued him from two SharpClaws, Tricky has remained as a companion to Fox for a remainder of his adventure. Their relationship is comparable to a human and its pet dog. Tricky assisted Fox, who gave him commands to perform various duties on the adventure. Tricky's favorite snack is Blue GrubTub Fungi, which are necessary for allowing him to perform a command. 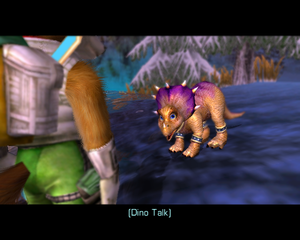 Fox and Tricky meeting each other at the Hot Spring

In Star Fox Adventures, Fox first meet Tricky being chased by SharpClaw grunts on Ice Mountain. After a period of searching, Fox had opened the cave Tricky was imprisoned in and Tricky immediately escaped. Tricky continued running while Fox dealt with the two SharpClaw. When the two next met up, Tricky was laughing at Fox for falling into a hot spring when Fox got a translator from Slippy. Tricky was then told how his mother was in trouble at ThornTail Hollow and asked Fox to take him there. The two found the Queen EarthWalker unconscious and Tricky suggested that Fox find six White GrubTubs to help his mother. Upon feeding the Queen the fungus, she revived and told Fox about the planet's predicament. She then told Fox to take Tricky with him so he could supply help.

The two eventually made their way to DarkIce Mines where Tricky learned the ability to breathe fire. Here, Tricky was lost in a blizzard and was once again captured by the SharpClaw. Fox descended through the mines to once again find Tricky imprisoned, but was able to free him with a SharpClaw key he had previously found. Tricky helped Fox find a key to cell next to him that allowed Fox to free Belina Te, daughter of the SnowHorn tribe leader. Tricky followed Fox as deep into the mines until Fox was required to go it alone and fight the monster Galdon, where he retrieved a SpellStone. The two hurried to the Volcano Force Point Temple where Fox laid the SpellStone. On the way back, a Krazoa appeared and charged Fox with the mission to find the other five spirits to save a vixen named Krystal. At first unwilling, Tricky convinced Fox to aid her. The two managed to obtain the spirit and went to the WarpStone so that he could teleport the two to the Krazoa Palace. Unfortunately, the WarpStone was unable to teleport Dinosaurs and Fox was once again forced to go it alone.

Tricky then followed Fox to Cape Claw. Fox proceeded to free the Queen CloudRunner, Tricky told the Queen to go away and insulted her due to a rivalry between the two tribes. While Fox agreed to go to the CloudRunner Fortress, Tricky would not and stayed on Dinosaur Planet, waiting for Fox to return. When Fox finally did come back, the two made their back to Cape Claw and found a hidden entrance to the Ocean Force Point Temple. Tricky made it through the temple, following Fox the entire time and watched him place the SpellStone in the temple.

When Tricky returned to his mother with Fox, she told them they would now have to go to the Walled City and that this was were his father was imprisoned. Fox opened a hidden section of room in the back of the cave and the energies that the King EarthWalker had hidden there opened the gateway to the Walled City. Fox and Tricky flew to piece of the planet where the Walled City was located. The two landed there to find the RedEye tribe on the loose. Tricky helped Fox find a new staff power that allowed him to defeat the RedEyes and open the palace so they could meet the King. The King advised them to be careful, for the SpellStone was guarded by the King RedEye a dangerous and savage Dinosaur lord. Tricky stayed behind while Fox defeated the savage and then returned to the main planet and helped him place the SpellStone in the Volcano Force Point.

After meeting with the GateKeeper of Dragon Rock, Fox and Tricky flew to the piece of Sauria where it was located with Fox's Arwing. Unfortunately for Tricky, the situation called for Fox to get help from other Dinosaurs more than him this time and was unable to help Fox in his battle against Drakor. He did manage to help Fox place the SpellStone in the Ocean Force Point Temple, though they were both surprised when the pieces of the planet do not reunite.

Tricky recommended that they visit his mother. The Queen told them that they should return to the Walled City and ask the King EarthWalker for help. Tricky and Fox did as she said and asked the King what to do. He suggested that Fox go look for the two remaining Krazoa spirits while Tricky stayed behind. Fox later returned with the Krazoa spirit and said goodbye to Tricky, telling him that he was now an honorary member of team Star Fox.[1]

Tricky reappears one year later during the Aparoid invasion in Star Fox: Assault. Krystal had picked up telepathic distress signal from Sauria and Fox immediately had his team fly to the planet. After Fox and Krystal had mostly cleared the area of Aparoids, they managed to find Tricky, who had grown exponentially over the year. Tricky was giving the two a ride when he asked if he could go with them. Fox said no and that it was up to Tricky to defend Sauria. Tricky agrees and said that the two could come back on their honeymoon when this was all over, catching Fox off guard. Fox stuttered for a while before telling Tricky he was too young for the conversation and Tricky told him not to treat him like a kid. At this point, Krystal was forced to break up the fight.