Amanda (アマンダ, Amanda) is an anthropomorphic female frog and the love future wife of Star Fox mechanic Slippy Toad. The two met and fell in love on the planet Aquas sometime after the events in Star Fox: Assault, but somewhere before the beginning of Star Fox Command.

Amanda, at first, appears to be very pushy and hates to be kept on the sidelines, but it all seems to stem from her undying devotion to her fiancee and wanting to fight by his side. Perhaps, also to keep from feeling useless. She is very protective and caring toward Slippy and is not afraid to show it.

Amanda pilots the Tadpole in Star Fox Command as her personal ship. 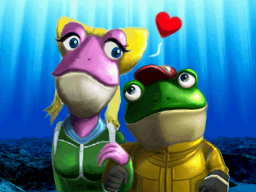 Slippy Toad and Amanda in the prologue of Star Fox Command.

This story occurs if ROB 64 decides to go with Fox and Slippy after defeating Oikonny.

Amanda quickly appeared after Slippy and Fox went to Aquas to look for her. She had been fighting off the Anglar invaders when the two ran into her. After the fight, Amanda and Slippy talk to each other before Amanda left to return to Aquas.

This story occurs if Fox decides to continue on Corneria alone.

Amanda and Slippy contacted Fox shortly after he first fought the Anglar on Corneria. Here, Amanda introduced herself as Slippy's fiancee and asked Fox to prohibit Slippy from joining the fight.

This story occurs if Fox decides to meet up with Falco after flying solo on Corneria.

Soon after approaching Aquas, Fox and Falco received a message from Amanda. She revealed that Slippy had run off to rejoin the team and asked if he was there. When they responded no, she quickly arrived at the scene of the battle and found that Octoman had brainwashed Slippy. Thanks to the quick thinking of the three pilots, Octoman was defeated and Slippy was rescued. When Fox revealed that he was going to look for Krystal, Amanda said farewell to Slippy and returned to Aquas. 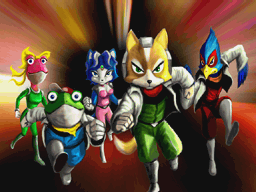 Amanda with the Star Fox Team in an ending of Star Fox Command.

This story occurs if Krystal accepts Fox's apology on Katina.

Amanda only appeared in the ending scene of this storyline. The ending reveals that Amanda joins the Star Fox team so that she may fly with her husband, Slippy.

This story occurs if ROB 64 chooses to follow Lucy to Corneria.

During the invasion of Corneria, Amanda appeared alongside Krystal and Katt Monroe to help Lucy Hare fight off the Anglar. The four pilots managed to defeat the invasion forces together. After the battle, Amanda introduced herself to Lucy as Slippy's fiancee and helped the others plan a party for the returning Star Fox team. 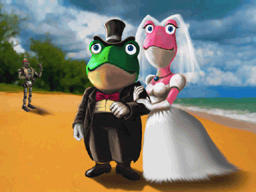 This story occurs if Slippy decides to go to Aquas after saving Peppy.

When Slippy went to find Amanda, she came to help him halfway through his mission. The two reunited on the Great Fox. There, Amanda, wanting some privacy with Slippy, turned off ROB 64, much to Slippy's chagrin. She also managed to convince Slippy to let her join him in the fight against the Anglar.

Amanda helped Slippy destroy the Anglar's forces on Aquas, including the Devil Shark, piloted by Octoman's minion, Zako. Amanda then agreed to marry Slippy immediately. On the shores of Aquas, ROB 64 married the two and they eventually had many children.