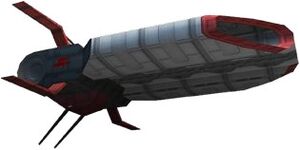 The Great Fox is the successor of original Great Fox, and is used by the Star Fox team in Star Fox Command.

Faced with the loss of their mothership during their invasion of the Aparoid Homeworld, the Star Fox team had to purchase a new one. The ship was a decommissioned Cornerian Assault Carrier, which, as a result, had all of its weapons and military grade hardware pulled, leaving just a basic hull. As a result, the ship is taxed in terms of defense, and is significantly weaker than the original Great Fox, to the point it can't withstand an assault by even the weakest of enemies for a prolonged period of time. However, this makes it more cost-effective and much less expensive than its predecessors. The ship was restored, somewhat, upon purchase, as it was able to use missile strikes on clusters of attacking enemies, which proved useful, as attacking and defeating enemies from afar rather than attack them directly with a pilot was far safer.

The new ship looks completely different from the past models of the Great Fox, resembling more of a space-faring aircraft carrier than a battle-cruiser.