From Lylat Wiki, your source on Star Fox information. By Fans, for Fans.
(Redirected from Invader II)
Jump to navigationJump to search 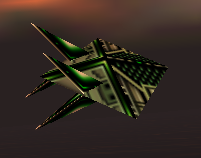 Invader II Fighters are a type of star fighter used by the Venomian Army in Star Fox 64. The Star Fox team first encounters them at Katina to aid the beleaguered Cornerian Defense Force. The Invader II Fighters have an improved design over the Invader I Fighter, although they still retain numerous design flaws and proved vastly inferior to Cornerian Fighters.

In an effort to improve their odds, the Invader II's were painted the same colors as their Cornerian foes, hoping that Star Fox would accidentally target and shoot down their friends in the confusion. It initially had worked, although only one Cornerian Fighter was shot down by friendly fire, coming from Peppy Hare. Later in the battle, the Arwing's Aiming Cursor could distinguish between allies and enemies. Although several Invader II Fighters were deployed, they were unable to gain air superiority or protect their carrier Saucerer from destruction.