Leon Powalski is one of the original Star Wolf members and the rival of Falco Lombardi. He first appears in Star Fox 64.

It is also revealed in Star Fox: Assault that Leon also specializes in killing, hence his title as an "assassin" in the instruction booklet and a "killer" in official artwork. Leon is also shown to have sympathy for other reptilian or amphibious creatures (like Slippy).

Despite his ruthless swagger and love of the hunt, Leon loves to adorn his maniacal disposition to maintain his spot as Star Wolf's assassin. This shows that he is somewhat of a narcissist, and enjoys his feared reputation as the killer, as indicated from his quotes.

Leon's personality in Star Fox Command appears to contradict his cold-blooded image. It is implied that, beneath his facade, he has a soft spot for peace. This is hinted at in his profile in the Pilot Gallery and his rejoicing after defeating the Anglar Emperor because he claims that he will look forward to parades with flowers and other such niceties.

"A member of Star Wolf who's a cold-blooded assassin. He has no morals or conscience and will perform any job with machinelike disinterest."
— Star Fox: Assault instruction booklet, page 39

In Star Fox 64, Leon was a member of the original Star Wolf team that was hired by Andross during the Lylat Wars. The Star Fox team first encountered him and the Star Wolf team on Fichina. Here he tried to prevent the team from stopping a bomb from going off in a Cornerian base. In every battle against Star Wolf, Leon would focus on fighting Falco. Leon would eventually be shot down by Fox, who then proceeded to take out the bomb. After being shot down, Leon became incensed from his defeat.

If Fox failed to shoot down Leon at Fichina, he retreats to defend the the Bolse Defense Outpost. If Star Fox goes to Venom from Area 6, they must fight Leon and the Star Wolf team in their new Wolfen II vehicles. Leon is shown with a robotic eye in the battle, due to his injuries from the previous fight.

In the nine years following up to Star Fox: Assault, Star Wolf left the Venomian Army's employment, lost two members, and hired a new member, Panther Caroso. Aside from Wolf, Leon is the only original Star Wolf member to remain on the team. Leon assisted Wolf in building an empire in the Sargasso Space Zone. When Star Fox infiltrated the base, they must fight Leon and the Star Wolf team again, whom they successfully defeat.

After Fox was ambushed by the Aparoids, Star Wolf revealed their survival and saved him. Leon and Star Wolf followed Star Fox to the Beltino Orbital Gate and helped them destroy the missiles sent to destroy the base. They also entered the warp to the Aparoid Homeworld. Before the Star Fox team made it to the Aparoid Queen, Leon with the rest of Star Wolf distracted the queen's guards so that Star Fox could make their move.

Leon and Falco's rivalry is more noticeable in the game, as both of them make snide remarks about each other, even when cooperatively battling the Aparoids. 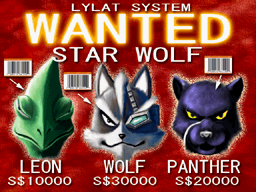 Leon and Star Wolf in the game's intro

In Star Fox Command, Leon remains a loyal member to Star Wolf. Due to their criminal activity, Leon and Star Wolf are wanted all across the Lylat System for a bounty. Leon has the lowest bounty of $10,000. Leon also pilots his own ship, the Rainbow Delta.

Wolf, Leon, and Panther attacked Fox and Slippy on their mission on Fichina. While Leon appeared here, he played no large role in the attack.

This story occurs if Fox goes to Fichina to hire Wolf.

Once again, the Star Wolf team attacked Fox on Fichina. Leon's only role was taunting Fox for fighting three on one. Later, when Wolf and Fox were heading to the planet Solar, Wolf suggested they forget about Falco and look for Leon and Panther.

This story is seen if ROB 64 follows Fox on Katina.

In this storyline, Fox went to Fichina to beg Krystal's forgiveness. She was there with two of her new teammates, Leon and Panther. Leon taunted Fox for his mistakes, but was the only one to think about him after the mission. Leon laughed at Fox as he begged Krystal to rejoin his team.

This story occurs if Krystal chooses not to return to Star Fox.

Leon followed Krystal and Panther to Venom where they met up with Wolf. Leon revealed that he couldn't wait to be hero[1] and seemed to show a friendlier side.[2] Leon helped his team members finally defeat the Anglar Emperor and returned to Corneria to claim his title as hero.

Leon makes a cameo appearance in the Lylat Cruise level of Super Smash Bros. Brawl. If you use Fox, Falco, or Wolf on the stage and press the taunt buttons repeatedly without being interrupted, Leon and other Star Fox characters will comment on the battle. Leon is featured in the following events:

Leon received his own trophy in Super Smash Bros. for Wii U.