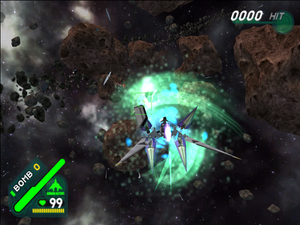 A barrel roll is an aerial maneuver where a starfighter spins to deflect fiery or basic laser attacks from a Smart Bomb or Predator Rocket. This technique is featured in every Star Fox game.

In Star Fox 64 and Star Fox: Assault, barrel rolls make the player turn or move faster if it is in the same direction as the ship's movement. This is the only way to avoid one of Andross's attacks in both games. It cannot deflect rainbow beams from the Gorgon.

The Arwing cannot perform a barrel roll and instead utilizes the related aileron roll technique. The only exception is in Star Fox: Assault, where the Arwing's G-Diffuser creates a gravitational field allowing it to collect items easily.

Peppy's "Do a barrel roll!" phrase became popular enough to become an internet meme. It is referenced in Star Fox Zero, where in an optional mission, the player plays as Peppy. Every time a barrel roll is done during the mission, he will shout, "Barrel roll!".