Fuel Cells drastically differ in appearance between both games. In Star Fox Adventures, Fuel Cells are blue spheres containing a spark of electricity inside. In Star Fox Command, Fuel Cells are much larger, about the size of spacecraft. It was changed to a green orb with a red circle orbiting it. 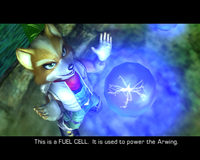 In Star Fox Adventures, ROB 64 accidentally scattered the Fuel Cells all across Dinosaur Planet in an unsuccessful attempt at sending them to Fox. Fuel Cells are collectible items that are used as a power source for Fox's Arwing, which is needed to reach the four SpellStone locations torn from the planet itself. Two Fuel Cells are often found together.

Up to 75 Fuel Cells are scattered over Dinosaur Planet. Only 42 of them are actually used, therefore the other 33 are optional. Collecting the remaining Fuel Cells does not affect the game's percentage. Fox can access each of the locations by having:

Fox can also use his P.D.A. to find nearby Fuel Cells. This causes an arrow to appear on-screen, and it flashes red when a Fuel Cell is nearby.

The ShopKeeper also sells individual Fuel Cells at the ThornTail Store for 10 Scarabs each (or 8 Scarabs at a bargain price). If the player were to constantly purchase Fuel Cells, this reveals that Fox is capable of carrying up to 255 Fuel Cells at a time. 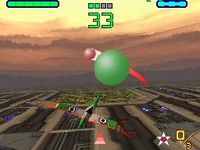 A Fuel Cell from Command

In Star Fox Command, the Fuel Cells have an entirely different purpose: each one adds 25 seconds to a character's timer. A few of them are placed across the map. Some Fuel Cells can be obtained from defeating enemies. By performing a barrel roll, the player can also magnetize a nearby Fuel Cell to them.