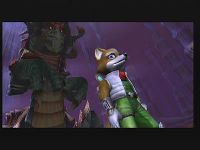 Galdon is a large, monstrous, insect-like dinosaur boss featured in Star Fox Adventures. He has four legs, two arms, a stinger, and a head surrounded by spikes.

When Fox McCloud and Tricky find a warp pad in DarkIce Mines, they warp and discover Galdon, frozen in an underground cave with the first SpellStone in-hand. After Tricky melts him using the Flame Command, he wakes up and swallows the SpellStone, challenging them. Fox attacks by hitting him on his stinger, but this soon enrages Galdon, who swallows Fox as well. Once inside him, Fox notices that the Spellstone is held within some sort of membrane, and the latter resorts to whacking the membrane to get the SpellStone. The stomach acids slowly take away at Fox's health, so he must be quick. This action causes Galdon to regurgitate, and once free, Fox notices a weak point in Galdon's chest. After pelting him with the Fire Blaster, Galdon once again swallows Fox. Once inside, McCloud repeatedly beats the membrane, finally releasing the SpellStone.

When the SpellStone is freed, Galdon begins gets sick. After throwing up Fox, Galdon clutches at his throat, gurgles, and eventually chokes to death. He dies after uttering a low burp.