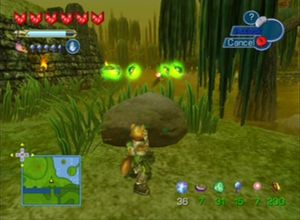 Fox McCloud lifts up a rock in LightFoot Village, revealing some Scarabs.

Rocks are the hiding place of Scarabs, the currency of Dinosaur Planet in Star Fox Adventures. The rocks come in various sizes and typically, the larger the rock, the larger the amount the Scarabs hiding under it will be worth.

In order to get the Scarabs out from under a rock, Fox McCloud must use Krystal's staff as a lever to lift it up. The player does this by manouvering Fox so that he stands in front of a crevis on the underside of the rock marked by six green arrows painted onto it. An "A" button icon appears above the area. When the player presses it, Fox crouches down and slides the staff under the rock.

The player must then tap the "A" button repeatedly to make Fox lift up the rock. Larger rocks will require quicker button presses as they are heavier and harder for Fox to lift.

Once Fox lifts the rock high enough, he then gets into a stronger stance and the Scarabs fly out of the other side. The player must then press the "B" button to make Fox withdraw the staff from under the rock and quickly gather the Scarabs by running over them.