From Lylat Wiki, your source on Star Fox information. By Fans, for Fans.
(Redirected from Dorisby Battleship)
Jump to navigationJump to search 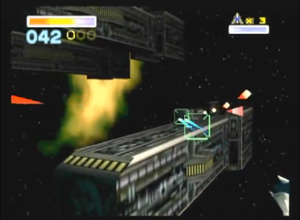 Dorisby-class Battleships are large, heavily-armored battleships used by the Venomian Army in Star Fox 64 and its Nintendo 3DS remake, Star Fox 64 3D. Adorned at the front with the face of Andross, the cuboid-shaped warships were armed with two laser turrets located along the top of the ships, and supported enough armor to be practically invincible against even Smart Bombs. However the turrets, along with four bunkers situated in pairs along each side of the Dorisby, could be easily destroyed by starfighter-grade lasers, rendering the battleship impotent.

A large force of Dorisby battleships engaged the main Cornerian battle fleet at the Battle of Sector Y. Despite being employed in large numbers, the ships failed to prevent the Star Fox team from penetrating their battle lines and destroying their flagship, scattering the fleet in defeat. The Dorisbys were soon retired.