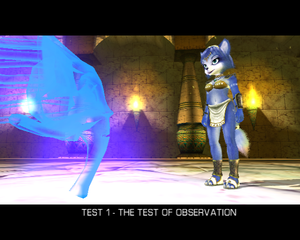 The Krazoa Spirits were the six peace spirits and bringers of life to Dinosaur Planet in Star Fox Adventures, who also made flow the magic of the SpellStones. After being safe in the Krazoa Palace for a million years, they were hidden all over Dinosaur Planet during General Scales' attack against the Palace defending EarthWalkers, as in the wrong hands, the Spirits could bring great terror. Fox had to return them to the Krazoa Palace in order to end the war against Scales, prevent the Spirits and Sauria from dying and to save Krystal, trapped within the crystal on top of the Palace. Only those who were of pure heart can be "possessed" by the spirits until released at Krazoa Palace.

Andross, knowing that the power of the Krazoa could revive him from his previous defeat (as he was at this time a disembodied spirit), was the one who trapped Krystal inside a crystal to drain her energy and use it to control to Krazoa Spirits. Once Fox released all the Krazoa Spirits, Andross used their power to resurrect himself. Once Fox destroyed him again, the Krazoa spirits were able to put Sauria back together.

In order to obtain the Krazoa Spirits, Krystal had to pass one test before got capture by unknown force and Fox had to pass five tests:

If they fail a test, the Krazoa Spirit says "You have failed!".