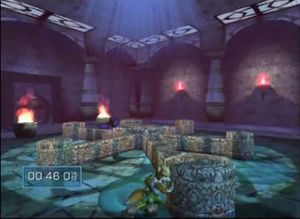 The Krazoa Test of Strength with Fox (near) pushing against a blue SharpClaw (far).

The Test of Strength is the fourth Krazoa Spirit test in Star Fox Adventures.

The test takes place in the main hall of the Krazoa Shrine in SnowHorn Wastes. Fox and a blue SharpClaw push against each other using a large sculpted stone structure. The player must press the A button repeatedly to get Fox to move the structure. In order to pass the test, Fox must push the opposing SharpClaw 180 degrees around to where he started. If he does not meet this goal within a minute, Fox fails the test and is transported back to the start of the shrine. The SharpClaw cannot push Fox back further than where he originally started.

The Test of Strength is similar to Chief LightFoot's second test in LightFoot Village, except Fox's opponent was a LightFoot, whom he had to push against 90 degrees with a smaller structure.