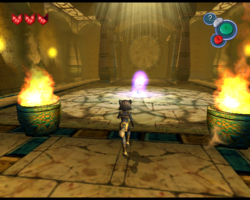 Krystal in the first Krazoa Shrine of Star Fox Adventures

The sixth and final Krazoa Shrine is different because it does not host a test of Skill but rather a boss battle against General Scales, although when the battle starts, it is immediately interrupted by a voice who demands that General Scales gives the last SpellStone to Fox. As a bonus, Fox also retrieves the last Krazoa Spirit, which was contained within General Scales.