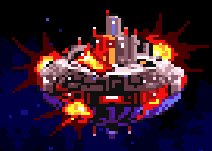 Astropolis was a floating space station base built by Andross which sat within the atmosphere of the Lylat System's Sun. It was the stronghold from which he launched a massive attack on Corneria with several Canon Destroyer Space Cruisers as well as IPBMs (Inter-Planetary Ballistic Missiles) which where launched from other planets in the System.

Ultimately, The Star Fox team pushed Andross' forces back until at last, after defeating Wolf O'Donnell, they and the rest of the Cornerian Forces were able to launch an offensive on Astropolis. During the attack, one of the Star Fox members (Possibly Fox McCloud) dived deep into the interior and after making their way through the corridors found and confronted Andross' Core Brain. When the Core Brain's automatic defenses failed, Andross himself took control, fleeing into a large chamber in the very center of Astropolis. There he was defeated by Starfox and the entire base began to explode as the Core Brain was destroyed. The Star Fox pilot fled the space station and escaped just as it exploded behind them, the remainder of the base and the forces remaining in it, and possibly Andross himself fell into the sun as Star Fox returned to Corneria.

Astropolis' only appearance in a game to date is in the unreleased Star Fox 2. It features as the final level in the game and as the location of the player's fight with Andross. It is only accessible after every other level in the game has been cleared.