From Lylat Wiki, your source on Star Fox information. By Fans, for Fans.
(Redirected from Katt)
Jump to navigationJump to search

Katt Monroe is a supporting female character from the Star Fox series. She is an anthropomorphic cat with grey and mildly-white fur (although was originally pink and white in color). She made her official debut appearance in Star Fox 64. It is widely believed that Katt Monroe is a reincarnation of Miyu from the canceled game Star Fox 2. She is voiced by Lyssa Browne in every appearance.

Monroe originally hails from planet Zoness. She pilots a ship of her own known as the Cat's Paw. She first appeared as an ally in Star Fox 64 when Star Fox team attempted to rescue planet Zoness from its invaders, and she also assisted them on either Macbeth or Sector Z depending on whether they passed through Zoness or not. Katt's next appearance in Star Fox Command is a subject of controversy in the fan community due to her drastic redesign. She would later appear in Star Fox Zero.

Katt started out as a member of the Hot Rodders, a gang of pilots, with Falco Lombardi and several other members. Sometime after Falco left to join Star Fox, the Hot Rodders apparently broke up and Katt roamed the Lylat System on her own.

Katt ran into the Star Fox team for the first time on Zoness during Andross's invasion of Lylat. In her ship the Cat's Paw, she helped them on their way through the planet until they ran into one of Andross's lieutenants, Sarumarine. She helped them defeat the pirate ape and followed them to the planet that they next went to. If they went to Macbeth, she would help them activate a series of switches to defeat Mechbeth more easily. If Star Fox had gone to Sector Z, she would help them take out the missiles targeting the Great Fox. All the while that Katt was helping the team, she was also flirting with Falco, who did his best to drive her off.

About eleven years after the Lylat War, Katt was still on her own. She had rebuilt her ship and named it the Cat's Paw 2.

This story occurs if ROB 64 stays on Corneria with Lucy. 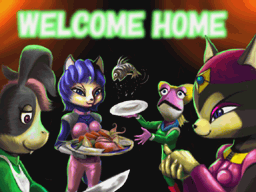 Katt planning a party for Star Fox with her new friends.

Katt had eventually ran into another friend of Star Fox, Krystal, who was also a former member of the team. The two eventually met Amanda, the fiancee of Slippy Toad, who joined them on their way to Corneria. They arrived just in time to aid Lucy Hare and ROB 64 against an entire Anglar invasion party. The four defeated the invasion and soon got word from Peppy Hare, Lucy's father, that the previous Star Fox team had defeated the Anglar Emperor. After hearing the news, Katt stated that she was hungry which inspired Lucy to plan a party. What happened to Katt after the party is unknown.

This story occurs if ROB decided to look for Falco after aiding Fox on Corneria.

Katt was exploring the Asteroid Belt when she saw Falco and aided him in fighting a series of Anglar forces. Even with the help that she gave, Falco insulted her and she flew off, promising not to help him again.

This story occurs if Falco does not join up with Fox on Aquas. 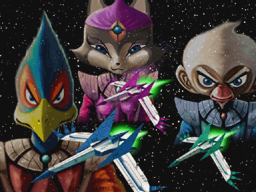 Katt with Falco and Dash Bowman on their new team.

Despite what she said to Falco, Katt came to his rescue when she saw the trouble Pigma was causing him. They defeated the android together, but Katt was once again chased off by Falco before he found out that Fox and his crew had defeated the Anglar without him. Katt made the suggestion for Falco to cheer up by creating his own mercenary team. The two teamed up and recruited Dash Bowman for Falco's new team, Star Falco.